I backed this game on kickstarter on a whim because it was so cheap ($19). But now it's hard to get hold of and is probably double that price. I don't normally like roll and writes, which probably comes from my dislike of dice in general, but this game is so good.

There's not much that can be said for components in a roll and write, it's paper and pen, right? But this one is twice as good as your average roll and write because it has two sheets per player - both different. The custom die are nice and the wooden markers used for the solo variant are of decent quality.

This game is what you'd expect, you roll the dice, you mark your sheet. However, the intricacies in some of the choices are amazing. Pick a die because you don't want the other player to get it, get X now, so you can get Y later, which will give you Z. The engine building aspect really appeals to me and the combos you can pull off can be crazy as per "ganz schön clever". As you get toward the end of the game, you'll find one die ends up with 9 or 10 marks on your sheet. I've played this solo and I've played with my son, who understood the rules at age 7 and still gives me a run for my money - although I switch the rules so he goes first every round to balance a bit.

Playing solo against the AI is a different experience, almost paradoxically so. Usually in solo versions of multiplayer games, you end up taking away the interactive nature of it. But this AI goes from being a multiplayer solitaire to a quite aggressive 'mess your board up opponent'. The AI doesn't have their own sheet, but blocks the spaces on your own sheet. I found myself racing the AI in some cases to get things built quickly before I got blocked. It feels a little of a non-issue at the start of the game, but when it gets to round 7-10 you certainly wish you made different decisions at the start.

My favourite roll & write. I'd recommend for either multiplayer or solo. I'd like a better win condition for solo than 'beat your own score' but not sure how else it would work. The theme is decent here, which makes the game easy to learn - everything comes back to fishing. 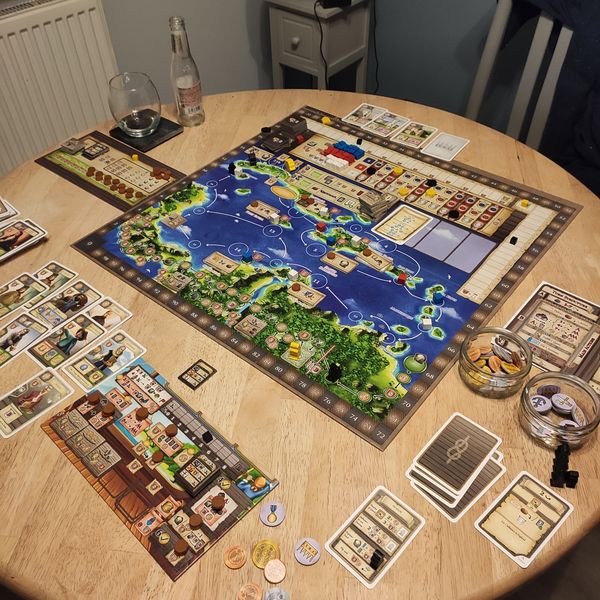 A huge game with a lot of stuff, worth the setup for a decent game