This game has been on my list for a while, and I finally took the plunge and got it. I was not disappointed. I haven't manged to play multi-player, but the solo experience is immense.

First off, there are a lot of then. Disks, cards, cubes, markers, workers amongst others, but they're good quality. The disks are a bit fiddly and the tableau could have been indented to allow for them to stay put, but apart from that, everything works well. The imagery and iconography is good and mostly intuitive and you feel like you've got your money's worth for how much comes in the box. One minor point - the box is just a box, there's no insert or organising so everything is messy in baggies at the moment but nothing some foam core can't fix.

The AI (Jean) does a fairly good job of mimicking human players and it feels like you are making meaningful decisions based on what Jean does. She doesn't score/accumulate resources in the same way as a human player but that just makes the upkeep somewhat simple. Once you get the AI in your head, you can easily do their 'turn' in a few seconds. One minor drawback of the AI is that (particularly on easy mode) you know what they're going to do because of the limited card deck.

Once I got the rules down I could play a game in less than an hour. However, the setup still takes some time (15 minutes ish). The decision making is interesting and you are force into different strategies based on the cards you get. Long term planning isn't too easy as the game is over fairly quickly. You have a choice of either taking it steady and eeking out as many actions as possible or racing to the end to beat Jean to those extra VP. I found myself thinking about multiple strategies/long term goals and simply not having the time to complete them. I wonder if extending to 6 rounds instead of 4 would be viable.

The 'story' mode adds another aspect to it. Although the narrative is pretty poor, the story tiles themselves are pretty powerful so you end up trying to get to these. It also changes the board slightly so each game can be different in subtle ways. Jean doesn't really interact with the story, other than it slows her down slightly.

I'm happy with the game. I'll likely play solo to at least the end of the story and probably more with just the base game. It's a classic euro game with tableau/hand management and a really good decision making point. I think it would be excellent as multi-player but would recommend as a solo game. 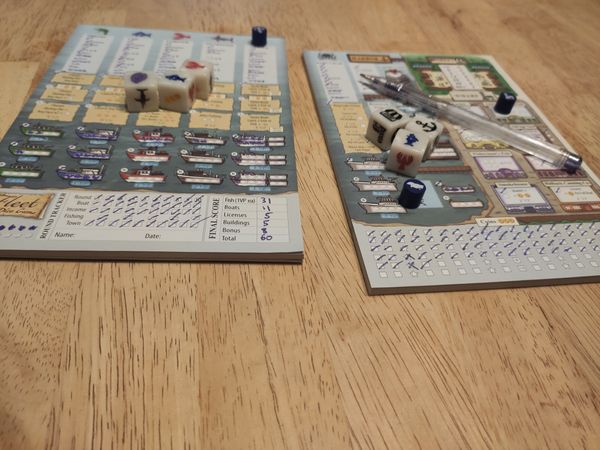 I backed this game on kickstarter on a whim because it was so cheap ($19). But now it's hard to get hold of and is probably double that price. I don't normally like